AWS Security groups and Network ACLs in AWS can be very discombobulating. If you are planning to take the solution architect exam the chances of getting a question about the difference between these two is very high. In this blog post, you will find out the comparison between these two and when should you use one.

If you are running a production server it is recommended to use a Network ACL. Any EC2 instances launched in the given subnet that has a Network ACL attached has all the Network ACL rules automatically applied.  When a VPC is created it comes with a default Network ACL which has all inbound and outbound rules allowed. However, if you create a custom Network ACL both Inbound and Outbound rules are denied. It is a great practice to have SSH restrictions in Network ACLs and in SGs as-well.  This scenario makes the ACL act as a backup.

Sample exam questions could be:

Security Groups and Network ACLs are part of the security section in the VPC section. It is very important to know the differences and when you should use either.

The below diagram displays two Network ACL and four security group. By having a Network ACL and Security group in place two layers of defences have been incorporated. This security strategy is called Defence in depth where several layers of security are placed. In case – if one fails the remaining can protect. Designing a secure architecture is extremely important and it is always best to read some of the latest AWS security white papers or other cloud providers white papers. 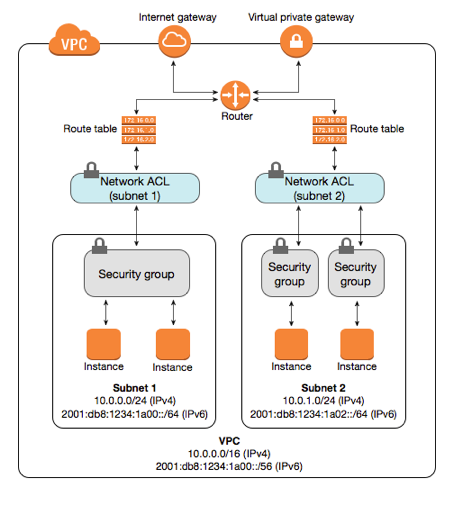 As you make changes more frequent within these days, it would be good to use AWS Config to monitor the rules in SGs and ACL. AWS Config monitors the rules and in case if it finds something suspicious for example Port 22 is open to public it will notify you and can also remove the CIDR block.